Choose a state and click the link below to sign up for the “Lunker Alerts” mobile alert system. With Lunker Alerts, you’ll receive critical information that lets you know when a season opens, spawn alert notifications and other important information such as early closures. We currently offer alerts for Alaska, Washington, Oregon and California.

With “Lunker Alerts!” you’ll be the first to know, when you’ll need to grab your pole, and hit your favorite fishing hole. 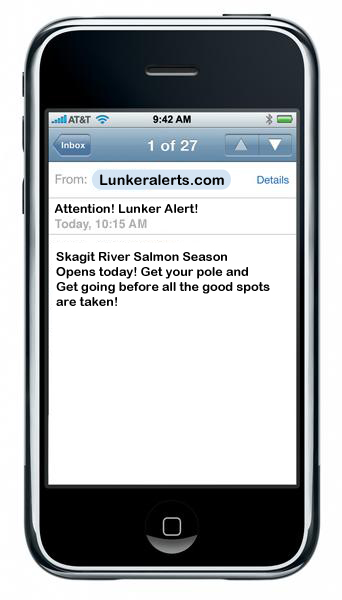 Alaska offers some of the best fishing in the United States. We currently offer Alaska fishing alerts sent VIA Text Message for the following eight rivers in the state of Alaska.

Washington State offers some of the best salmon and steelhead fishing in the United States. We currently offer Washington Fishing Alerts VIA text message for the following 30 major rivers in Washington.

Oregon has always been on of the upper tier salmon and steelhead fishing states in the country. We currently provide Oregon Fishing Alerts VIA text for the following nine major rivers.

California may not have as many salmon and steelhead fishing opportunities as the other states on the west coast but they do have some of the best fishing rivers in the country. We currently provide California Fishing Alerts sent VIA text message for the following nine major rivers.